This two part mini-series will teach you how to create an impressive page-folding effect with Core Animation. In this installment, you'll first learn how to create a sketch pad view and then how to apply a basic spine folding animation on that view. Read on!

Working with the UIView class is central to iOS SDK development. Views have both a visual aspect (i.e. what you see on the screen) and usually a control aspect (user interaction via touches and gestures). The visual aspect is actually handled by a class belonging to the Core Animation Framework, called CALayer (which in turn is implemented via OpenGL, only we don't care to go down to that level of abstraction here). Layer objects are instances of the CALayer class or one of its subclasses. Without delving too deep into the theory (this is, after all, supposed to be a hands-on tutorial!) we should keep the following points in mind:

So, what can we achieve with layers that we can't easily do with views directly? 3D, for one, which is what we'll focus on here. CALayer's capabilities put fairly sophisticated 3D effects and animations within your reach, without having to descend to the OpenGL level. This is the goal behind this tutorial: to demonstrate an interesting 3D effect that gives a small taste of what we can achieve with CALayers.

We have a drawing app that lets a user draw on the screen with his finger (for which I'll reuse the code from a previous tutorial of mine). If the user then performs a pinch gesture on the drawing canvas, it folds up along a vertical line running along the center of the canvas (much like the spine of a book). The folded up book even casts a shadow on the background.

The drawing part of the app that I'm borrowing isn't really important here, and we could very well use any image to demonstrate the folding effect. However, the effect makes for a very nice visual metaphor in the context of a drawing app where the pinching action exposes a book with several leaves (containing our previous drawings) that we can browse. This metaphor is notably seen in the Paper app. While for the purposes of the tutorial our implementation is going to be simpler and less sophisticated, but it isn't too far off ...and of course, you can take what you learn in this tutorial and make it even better!

Recall that in the iOS coordinate system the origin lies at the top-left corner of the screen, with the x-axis increasing towards the right and the y-axis downward. A view's frame describes its rectangle in its superview's coordinate system. Layers can be queried for their frame as well, but there's another (preferred) way of describing a layer's location and size. We'll motivate these with a simple example: imagine two layers, A and B, as rectangular pieces of paper. You'd like to make the layer B a sublayer of A, so you fix B atop A using a pin, keeping the straight sides in parallel. The pin passes through two points, one in A and one in B. Knowing the location of these two points gives us an effective way of describing the position of B relative to A. We'll label the point the pin pierces in A the "anchor point" and the point in B "position". Take a look at the following figure, for which we'll do the math:

The figure looks like it has a lot going on, but not to worry, we'll examine it bit by bit:

The calculation is quite straightforward, so make sure you understand it thoroughly. It'll give you a good feel of the relationship between position, anchor point, and frame.

I'm sure you're familiar with the concept of transforms such as scaling, translation, and rotation. In the Photos app in iOS 6, if you pinch with two fingers to zoom in or out on a photo in your album, you're performing a scale transform. If you do a turning motion with your two fingers, the photo rotates, and if you drag it while keeping the sides parallel, that's translation. Core animation and CALayer trump UIView by allowing you to perform transforms in 3D instead of just 2D. Of course, in 2013 our iDevice screens are still 2D, so 3D transforms employ some geometric trickery to fool our eyes into interpretting a flat image as a 3D object (the process is no different than depicting a 3D object in a line drawing made with a pencil, really). To deal with the 3rd dimension, we need to use a z-axis that we imagine piercing our device screen and perpendicular to it.

The anchor point is important because the precise result of the same transform applied will usually differ depending on it. This is especially important - and most easily understood - with a rotation transform through the same angle applied with respect to two different anchor points in the rectangle in the figure below (the red dot and the blue dot). Note that the rotation is in the plane of the image (or about the z-axis, if you'd prefer to think of it that way).

So, how do we implement the folding effect we're after? While layers are really cool, you can't fold them across the middle! The solution is - as I'm sure you've figured out - to use two layers, one for each page on either side of the fold. Based on what we discussed previously, let's work out the geometric properties of these two layers in advance: We now know enough to write some code!

Create a new Xcode project with the "Empty Application" template, and call it LayerFunTut. Make it an iPad app, and enable Automatic Reference Counting (ARC), but disable the options for Core Data and Unit Tests. Save it. 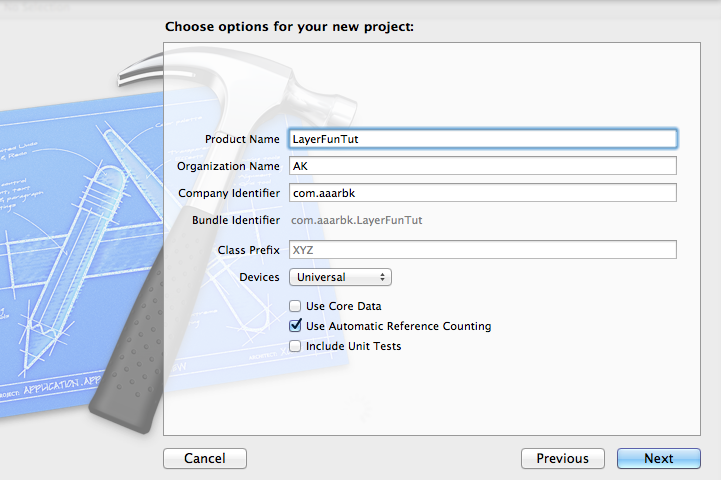 In the Target > Summary page that shows up, scroll down to "Supported Interface Orientations" and choose the two landscape orientations.

Scroll further down until you get to "Linked Frameworks and Libraries", click on "+" and add the QuartzCore core framework, which is required for Core Animation and CALayers. 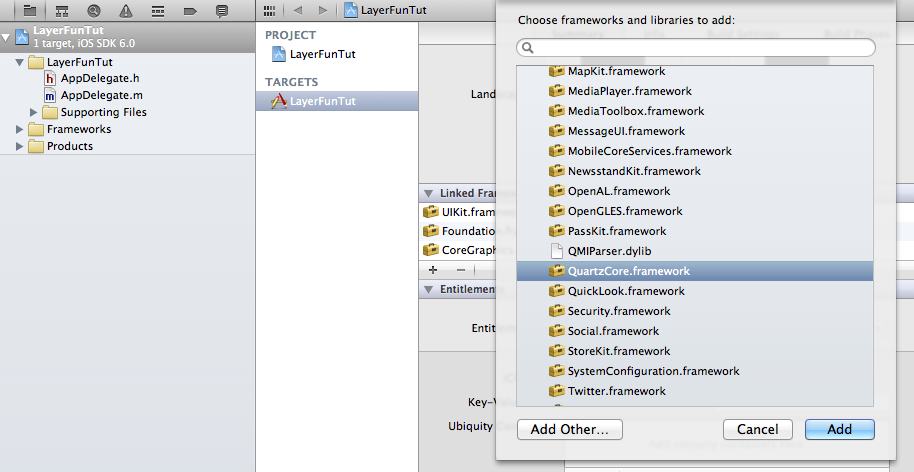 We'll start by incorporating our drawing app into the project. Create a new Objective-C class called CanvasView, making it a subclass of UIView. Paste the following code into CanvasView.h:

As previously mentioned, this is just the code from another tutorial I wrote (with some minor modifications). Be sure to check it out if you're not sure how the code works. For the purposes of this tutorial though, what is important is that CanvasView allows the user to draw smooth strokes on the screen. We've declared a property called incrementalImage which stores a bitmap version of the user's drawing. This is the image we'll be "folding up" with CALayers.

Time to write the view controller code and implement the ideas we worked out previously. One thing we haven't discussed is how we get the drawn image into our CALayer such that half of the image gets drawn into the left page and the other half into the right page. Luckily, that's only a few lines of code, which I'll talk about later.

Paste the following code into ViewController.m

Ignoring the commented out code for now, you can see that the layer set up is exactly as we planned out above.

In the AppDelegate.m file, replace all the code with the following (the only thing we've added is to include the ViewController header file and to make a ViewController instance the root view controller):

Build the project and run it on the simulator or on your device. Scribble on the canvas for a bit, and then tap on the screen with a single finger to trigger the gesture recognizer action (tapping with a two finger causes the 3D effect to end and the drawing canvas to reappear).

Not quite the effect we're going for! What's going on?

Getting Our Perspective Right

First, notice that the pages get smaller with each single tap, so the issue doesn't lie with the scaling transform, only with the rotation. The problem is that even though the rotation is happening in a (mathematical) 3D space, the result is being projected onto our flat screens pretty much the same way as a 3D object casts its shadow on a wall. To convey depth, we need to use some kind of cue. The most important cue is that of perspective: an object closer to our eyes appears larger than one further away. Shadows are another great cue, and we'll get to them shortly. So, how do we incorporate perspective into our transform?

Let's talk a little bit about transforms first. What are they, really? Mathematically speaking, you ought to know that if we represent the points in our shape as mathematical vectors, then geometric transforms such as scale, rotation, and translation are represented as matrix transformations. What this means is that if we take a matrix representing a transformation and multiply with a vector that represents a point in our shape, then the result of the multiplication (also a vector) represents where that point ends up after being transformed. We can't say much more here without diving into the theory (which is really worth learning about, if you're not already familiar with it - especially if you intend to incorporate cool 3D effects in your apps!).

What about code? Previously, we set the layer geometry by setting its anchorPoint, position, and bounds. What we see on the screen is the layer's geometry after it has been transformed by its transform property. Note the function calls that look like layer.transform = // ... That's where we're setting the transform, which internally is just a struct representing a 4 x 4 matrix of floating point values. Also note that the functions CATransform3DScale and CATransform3DRotate take the layer's current transform as a parameter. That's because we can compose several transforms together (which just means we multiply their matrices together), with the end result being as if you'd performed these transforms one by one. Note that we're only talking about the final result of the transform, not how Core Animation animates the layer!

Getting back to the perspective problem, what we need to know is that there's a value in our transform matrix that we can tweak to get the perspective effect that we're after. That value is a member of the transform structure, called m34 (the numbers indicate its position in the matrix). To get the effect we want, we need to set it to a small, negative number.

Also note that when we change the transform property of a CALayer, the deal comes with a "free" animation. This is what we want here - as opposed to the layer undergoing its transformation abruptly - but sometimes it's not.

Of course, perspective only goes as far, when our example becomes more sophisticated, we'll use shadows too! We might also want to round the corners of our "book" and masking our page layers with a CAShapeLayer can help with that. Plus, we'd like to use a pinch gesture to control the folding/unfolding so that it feels more interactive. All this will be covered in the second part of this tutorial mini-series.

I encourage you to experiment with the code, referring to the API documentation, and try to implement our desired effect independently (you might even end up doing it better!).

Have fun with the tutorial, and thanks for reading!

How to Grow Your App Team